• The Case for a Station in Palmer

New England Public Radio reported last week that we could see new Amtrak service in the Pioneer Valley on the north-south rail line as as soon as August.

The new service, which will be in addition to the Vermonter, will consist of two weekday trains from Greenfield to New Haven in the morning and two trains north from New Haven to Greenfield in the evening. All of the new trains will have scheduled connections with both Amtrak and Metro-North service at New Haven Union Station.

On the weekend and holidays there will be just one new train in each direction.

In a presentation that was made to the MassDOT Board of Directors last week, the tentative date for the start of service was listed as Friday, August 30, 2019.

The same presentation said that the start of service was dependent on the following list of actions:

In related news, on July 10, 2019 members of the western Mass. delegation met with MassDOT Rail and Transit Administrator Astrid Glynn to discuss details related to the launch of the new service.

It’s both wonderful and amazing to see such large group of our elected officials engaged and involved with the effort to expand passenger rail service in our region.

And to round out the news related to the new Greenfield rail service, we are pleased to report that Sen. Comerford’s earmark for $250,000 to support marketing of the new Greenfield service was included in the FY2020 state budget that was approved by the legislature on July 22nd.

This recent image from the station site shows that Newport Construction, the contractor on the station expansion project, is nearing completion of the work at the site.

Remaining work on the project includes, among other things, the application of the top-coat of asphalt on the access road and the parking lots at the station, installation of a bike rack, and new signage at the station.

It is expected that all of the construction work at the station platforms in Greenfield and Northampton will be completed in the coming weeks.

The proposed alternatives include these six options:

Alternative 2
Passenger Rail to Springfield with Upgrades to Existing Track

Alternative 3
Passenger Rail to Pittsfield with Upgrades to Existing Track

A detailed diagram for each of the proposed alternatives can be found in the meeting presentation, which is linked below:

Generally speaking, most members of the advisory committee appeared to be impressed by the possibilities that were presented by MassDOT and its team of consultants at the meeting. It was clear that a real and significant effort had been made on MassDOT’s part to come to the meeting with well thought out proposals for the committee to consider.

But with that said, many members of the advisory committee (and members of the public at the meeting) expressed their displeasure with options 1, 2 & 5 because these options call for only a dedicated bus connection between Pittsfield and Springfield.

There was vocal support expressed at the meeting for station stops in both Chester and Palmer. Oddly missing from all of the proposals, and the discussion at the meeting, was any mention of a possible station stop in the Westfield (pop. 41,000) which is located 20 minutes by auto to the west of Springfield.

Many at the meeting expressed their real concern with MassDOT’s admission that they and their consultants had not yet involved CSX — the owner of the rail corridor between Pittsfield and Worcester — in the study process. It is our understanding that CSX was involved at the equivalent point in MassDOT’s previous study of East-West Rail in 2016.

For those looking for a brief overview of the proposal we would encourage you to watch Sen. Eric Lesser’s (D-First Hampden and Hampshire) excellent 5-minute summary of the six proposed alternatives —

The entire meeting was recorded by Focus Springfield Community TV. A link to the video can be found on our East-West Rail Study Information web page.

The Case for a Station in Palmer 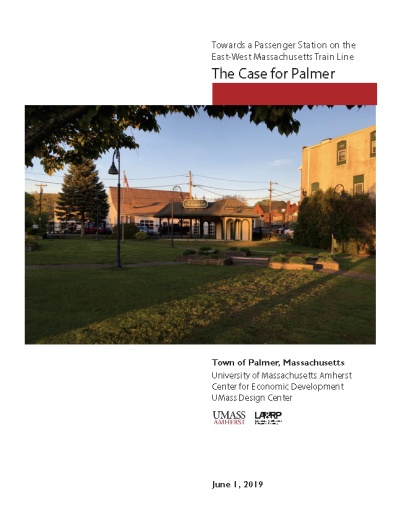 The study, which was carried out by a team from the University of Massachusetts Amherst Center for Economic Development, examined the the feasibility of the town of Palmer becoming a passenger stop on the proposed East-West passenger rail line.

The report concluded — based on interviews with members of the business community, team leaders, a community wide charette and a review of quantitative data focusing on the Lower Quabbin Region of twenty-one towns — that a strong case can be made for a station in Palmer, for the following reasons:

Sen. Jo Comerford’s (D-Hampshire, Franklin and Worcester) proposal to study East-West passenger rail along the so-called Northern Tier Route has been adopted by both houses of the state legislature.

The planned study would look at the feasibility of restoring passenger rail service between North Adams, Greenfield and Boston along the existing rail corridor that links these localities.

The wording for the study was included as Section 84 of the FY2020 state budget which was approved by the legislature on July 22, 2019.

Assuming that the governor does not veto Section 84 of the budget, work on the one-year study will start in June 2020.

“Massachusetts study for east-west rail on track”
By Anita Fritz | The Recorder | July 25, 2019

The $10 weekend rail pass on the MBTA Commuter Rail system is now permanent.

The pass allows for unlimited travel all day Saturdays and Sunday on all MBTA commuter rail lines and zones. The MBTA made the pass permanent after two six-month trials.

The $10 all-weekend fare is available on the mTicket app, onboard trains (cash or credit card from conductors), and at ticket windows at North, South, and Back Bay stations. The special fare applies to customers age 12 and above; the weekend fare allows adults to travel with two children under 12 at no additional cost.

If you are traveling from western Mass to Boston by train using the MBTA Framingham/Worcester Line we recommend that you us one of these two stations:

Grafton station | MBTA
1 Pine St, North Grafton, MA | Parking is just $4/day
This is the next station east of Worcester. Using this station, which is only 4 miles further drive, will save you about 10 minutes in travel time in each direction — since you won’t have to travel into/out of Worcester.

If you are traveling from western Mass to Boston by train using the MBTA Fitchburg Line you’ll want to travel from this station: